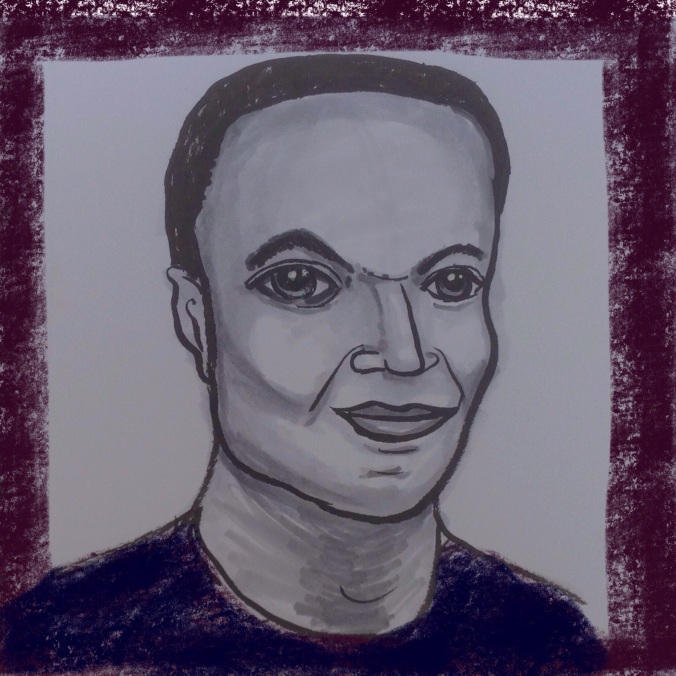 The hardest thing about drawing Steven Barnes?  Imaginary Tananarive Due standing over my shoulder saying, “You have GOT to be kidding me.”

You know what Steven Barnes is probably doing right now?

In which area he’d be writing is anyone’s guess. He’s well known for his work in science fiction, television scripts, mysteries, comics, and animation. He’s also written comic books, newspaper copy, and magazine articles. Additionally, as though there needs to be more, he’s a life coach and the author of his Lifewriting™ course, and maintains an active blog that seems to be an active marketing tool. Novice writers, you might check out his online thoughts on marketing yourself and your writing.

A quote from Barnes: “Life is a wonderful, complex, demanding game. The way to win is to decide what you want, focus on that goal, surround yourself with people who will support your dream, and nurture the ability to laugh at yourself.”

With that quote in mind, I chose Dream Park, a story of murder and mayhem in a live-action role-playing adventure game set in the not-so-distant future in a human-constructed environment that’s a fantastic combination of amusement park, extreme adventure trek, and virtual reality. This entry for the Great Balticon Readathon was new to me, a collaboration between Barnes and Niven. This was Barnes’ first published novel. Niven, the senior writer on the project, is the lead author, but Barnes wrote the raw draft. He cites the experience as an intense learning experience, a writing practicum of sorts, with the more experienced Niven acting as master craftsman to help Barnes understand the workings of  a novel.

Characterization is subordinate to plot in this novel, and both of these are secondary to the vision of the interaction of role playing games, live action adventure, virtual reality, and imagined future technologies. You can actually imagine a concept such as the Dream Park being created, which is a sign of a convincingly imagined future. This is the sort of book that will appeal to those who are hungry for a strong visual element and a fast-moving, battle-laden adventure.

One thing I appreciated was the amount of diversity present in the competitors and game masters. It was presented matter-of-factly, which is how it should generally be, with some of the more charismatic and positively portrayed characters casually depicted as non-white. Loved that, especially in a book originally published in 1981.

The novel and its sequels inspired the International Fantasy Games Society, which requested and received permission to use the name of the fictional governing gaming organization created by Barnes and Niven. This group still exists. A real-life Dream Park was attempted, but the organizing company went out of business in 1997. Living near Orlando, and witnessing the development of the major theme parks over the years, I suspect that something similar in scope is not too far in the future. I wonder if Barnes and Niven would attend?