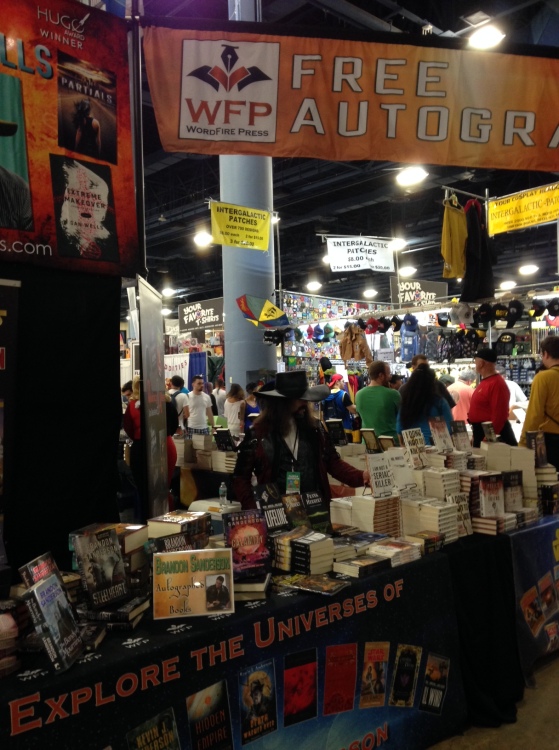 The self-proclaimed Tower of Geek from WordFire Press. Watch for this edifice, coming to a con near you! Say hi to authors. Discover cool books. See epic hats.

This has been a jam-packed week! Friday last, I gathered up the son, his various cosplay elements, a couple of fabulous hats, braved the infamous I-95, and headed to Florida Supercon. Saturday was sold out, a first for this event; congratulations to the organizers and volunteers for running a successful show!

Lots of great artists and some fun costumes in evidence. I got to chat with actor Emilio Delgado (Luis from Sesame Street) and we sang a bit of impromptu music from the “Lovers of 5” segment. I’d only seen that bit once, but the catchy tune, costuming, and staging stuck with me through the years. Emilio laughed and said it was one of his favorite bits. You can find the video online by searching “Sesame Street Give Me Five”: worth your time for the costuming and epic sideburns alone! That show had some great music. I think that segment, music and costuming alike, was likely a play on “Float On” by The Floaters. But I actually prefer the Sesame Street version. (Does it seem strange that a song about loving the number 5 would be performed by 4 guys?)

I love going to a convention that’s not primarily a literary event and seeking out the writers. At Supercon, I met some from indie and traditional publishing (sometimes both in the same person)! WordFire Press scored a great location in front of a set of entrance doors and erected their Tower of Geek; see photo above. Egged on by Todd McCaffrey, I entered a silent battle of hats with the gent above, which I will freely admit to losing. He had panache, and better accessories. And was unaware of our battle, until I told him he’d won. He won with panache too. A great hat and confidence go hand-in-hand.

Blew my budget on books and art (a refrain you will grow accustomed to around here) and you’ll be hearing about them in the weeks to come. Right now I’m in the throes of editing, though, so not much reading time. (I’m hoping to enlist a couple of younger readers to my cause today. I will use tea as a bribe, and with any luck I will get them to guest post here! Wish me luck!)

Also loved: attending a writing panel with Miami playwright and groovy human Andie Arthur (of Lost Girls Theatre fame) and her very generous friend, Kent Wilson, who so kindly distributed my extra ticket to the event to a forlorn-looking random stranger standing alone outside. (Kent went so I didn’t have to go through bag check again. And because he is an awesome human.) Kent missed part of the panel, but gave some huge delight to a guy who’d driven the length of two counties (on I-95) only to find there were no tickets available … Our co-conspirator walked up to him and transformed his day! There’s so much grim in the world. I love having been able to be a small part in this moment of kindness, and so appreciate Andie and Kent for helping it happen. You can find out more about Andie on her website. Or watch for her all over the South Florida theater scene.

In honor of Andie and Kent and the book-in-30-days panel we attended together, I’ll share with you a podcast I’ve discovered. (I wish I could remember who told me about this one. I want to think it’s Terri Windling, but I’m not sure.) In any case, I made the road trip north to Ocala (and back!) over the last three days for family stuff; wee dog Max and I while driving listened to several episodes of new-to-me podcast The Creative Penn by Joanna Penn. Just in time for Camp Nanowrimo, so of interest to some writers. But her opening thoughts on Brexit were calming to me, and very timely for reasons I won’t go into here, and I’d like to thank her for them. Whether you’re a new or established writer, indie or traditional, or a reader looking for more insight into the process, Joanna will have something in her backlist of podcasts that will be of use to you. Highly recommended.

How To Write 50,000 Words In A Month With Grant Faulkner

5 thoughts on “Supercon and Supercool Humans”